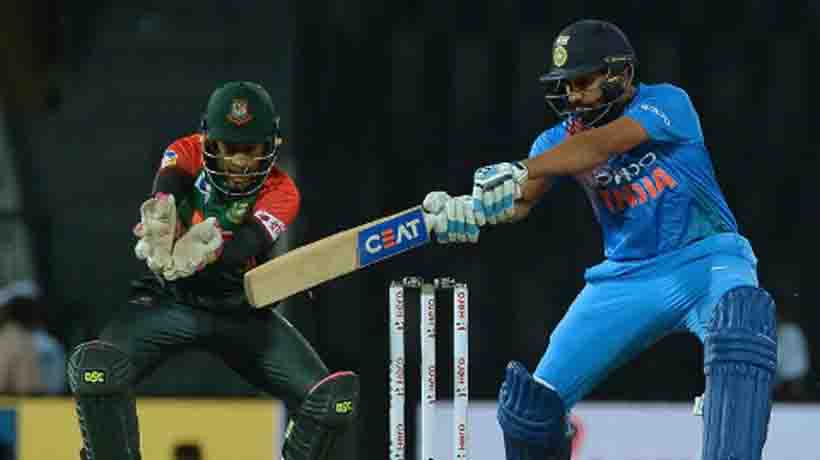 It was a game that India need to win to book a comfortable place in the final of the Nidahas Trophy. And skipper Rohit Sharma led from the front as he hit 89 to help India post 176/3 in their 20 overs. Coming in to bowl, young Washington Sundar stole the show as he finished with figures of 3/22 as India won the game by 17 runs to book their place in the final of the tri-nation series at the R Premadasa Stadium in Colombo on Wednesday.

India opener Shikhar Dhawan continued his good run of form in the series as he hit yet another masterful innings against Bangladesh. The southpaw stitched together a 70-run stand with Rohit Sharma to give the Men in Blue a perfect start in the match. But Dhawan couldn’t convert his start into a big innings as he was dismissed for 35 (27 deliveries) by Rubel Hossain. The southpaw’s innings included five boundaries and one huge six, at a more than healthy strike rate of 129.6.

These is a saying in cricket – whenever India opener is on song, he is arguably one of the best hitters in the game and Wednesday’s match was the perfect example of it. Rohit Sharma roared back to form in stunning style as he tore apart the Bangladesh bowling line-up with astounding ease. Rohit slammed 89 off 61 deliveries and put together good partnerships with Dhawan and Suresh Raina to guide India to a more than competitive score in the match. The only negative aspect of Rohit’s innings was that he couldn’t get over the 100-run mark.

This innings from Suresh Raina reminded the world what he is capable of and gave a glimpse of how destructive the southpaw can be in the shortest format of the game. Raina turned back the clock in stunning style as he bludgeoned 47 runs off just 30 deliveries, an innings which included five fours and two glorious sixes. Raina also put together a century stand with Skipper Rohit to guide India to the score that they eventually did.

Dinesh Karthik had nothing to do with the bat as he could just face two deliveries in the innings. And with the glouves in hand, he was as safe as ever behind the stumps.

The duo didn’t get a chance to bat at all in the match.

Washington Sundar put on stunning display with the ball and had it not been the genius of Rohit, the spinner would have been awarded the man of the match. Washington wrecked the Bangladesh top-order and accounted for wickets of Tamim Iqbal, Liton Das and Soumya Sarkar. Moreover, he gave away just 21 runs in his designated four overs to guide India to a good win.

All-rounder Vijay Shankar didn’t get a chance to bat in the match and with the ball in hand he went wicket-less. Shankar bowled is full quota of four overs and gave away 28 runs at an economy rate of 7. Although, he conceded just two boundaries off 24 delivering, he wasn’t able to flow of runs as the batsmen took singles and doubles very easily.

Shardul Thakur has had a very topsy turvy series and after the high of the match on Monday, comes this rather average performance on Wednesday. In his four overs, Shardul scalped just one wicket and gave away 37 runs at an economy rate of more than nine. Also, he conceded four boundaries and one six as well. Line and length sometime become a cause of concern for the India pacer.

Pacer Mohammed Siraj got a rare outing with the Indian team as replaced Jaydev Unadkat in the playing XI but he didn’t have the best of games donning the blue of India. Siraj scored a fifty but with the ball in his hand in his quota of four overs and was one of the main reasons why Bangladesh got close to the target. Siraj picked one wicket but that didn’t help India much as by then, the Men in Blue we’re already within winning distance.

Over the past couple of years, Yuzvendra Chahal has made a habit of picking wickets at the right moment and more often than not, he proves to be very economical as well. Chahal picked the wicket of the dangerous Mahmudullah and gave away just 21 runs in his designated four overs and was easily one of the pick of the Indian bowlers on the night.