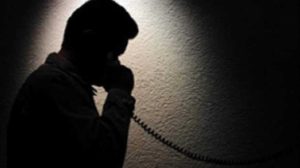 The call was made to the informer through internet from Mumbai. The caller said that they had pictures of the informer and all the excise officials who seized MDMA from two Palakkad natives near the airport on Saturday.

The seizure was the result of long term plan by the excise special team. Produced in Russia, the MDMA was smuggled through Kabul and Kashmir.

One ‘Bhai’ from Kuwait was controlling the well established racket in Kerala, excise sources said.